I rarely go to the movies. There's DVDs for that. However, recently, it turned out that I watched 4 movies in 4 nights, straight in a row. That usually doesn't happen, but somehow the stars aligned right.

The first movie was watched from Netflix, as a DVD we rented. We watched Queen to Play, which was this French movie about a Corsican hotel chambermaid, who suddenly gets a fascination towards chess. Her life changes around that fact, since suddenly, there's this one thing she can be obsessed about, while living in a loveless and sexless marriage. It was okay, but it wasn't the best movie we have watched. It was interesting to see Kevin Kline speak and act in French, though.

The day after, we saw another one. The second movie we saw was courtesy of the French Connection, and international club here in the university, that sponsors bi-weekly free movies. We watched Le Concert, which is a Russian-French movie about an orchestra, long disbanded by the Communist regime, but decides to masquerade as a spectacular orchestra when Paris invites them. It borders on the farcical, but otherwise, it was good hilarious fun.

The third movie we saw was Take Me Home, which is an indie movie about a poor man driving a fake taxi in New York City, who ends up taking a woman in a failed marriage across the country, and their adventures in the whole process. I sort of didn't like the movie, as it didn't engage my brain too much. The whole point of the movie is to do whatever it takes to make you happy. I already knew that. We watched this one in a rather obscure theater in town, at the invitation of one of my friends.

The day after, we watched another movie, again courtesy of Netflix. We watched 50/50, which is a comedy revolving around a twenty-something man who is diagnosed with a rare form of cancer, and his mid-life crisis. He goes through a break-up, and through chemo. He also forms new relationships. I think I enjoyed this one the most.

Anyway, most of the time, we watch a movie a week, but somehow, this week was just exceptional. 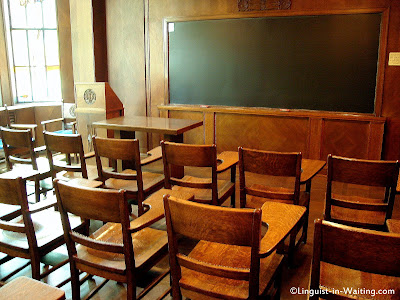 (Chairs and Blackboard, from my Cathedral of Learning Series)