Gallivanting in Guatemala and Honduras: Food on the Road

I have reached roughly the mid-point of my travel blogs relating to Guatemala and Honduras. As a little intermezzo, I am blogging about food I had while I was on the road. And as you will notice, ((re)fried) beans are featured heavily in Guatelaman and Honduran cuisine. It is heavily featured that at some point, I actually got sick of it, and gave in when I saw a McDonald's. But, let's not talk about that for the moment. 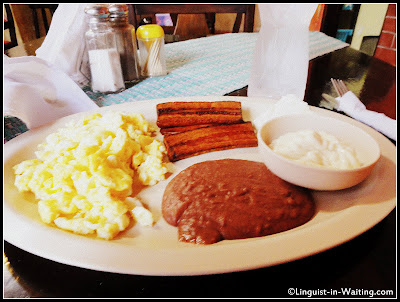 This was a breakfast I had while in Copán Ruinas, Honduras. I woke up early in the hostel, took a shower, and went out to try and find a place to eat breakfast. I found a cafe near the center of town, and got a desayuno tipico, a typical breakfast. This is what I got. It involves scrambled eggs, a dollop of cream, some fresh yet salty cheese, fried plantains, and beans. Oh, and an unlimited supply of fresh tortillas. This serving of beans was rather of a thick puree consistency. Don't worry, there are other types that will show up later. 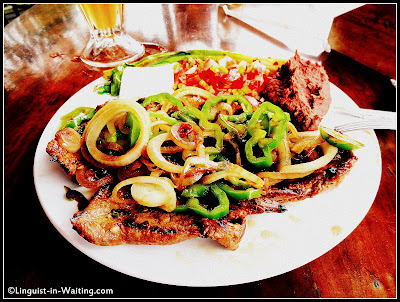 While in Copan, I also decided to visit a steak house. I believe the name was Asados Copan, and it was in the same block as my hostel. I ordered some sort of meat, which you can see above. They have an open grill, and they do a mean one. If you're a vegetarian, stay away from this place. Not surprisingly, there's always fresh tortilla and some more beans, together with your order. In this one, the consistency is similar to that of mashed potatos. 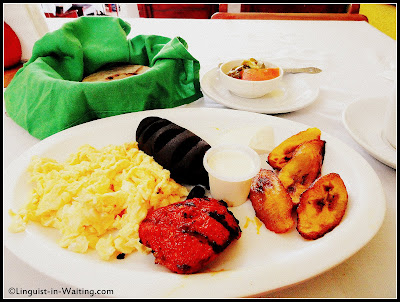 I then left Copan, and headed into Guatemala. I needed food while I was in Esquipulas, and I found this local joint where plenty of locals seem to have been eating before heading to church. I got breakfast. The meat was something they call tocino, and yes, there's still beans. This time, the consistency of the beans were rather dry, that you can form shapes out of it, as you can see at the picture above. 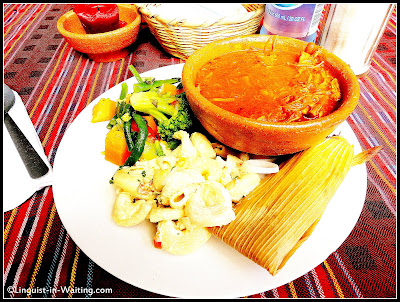 By the time I reached Antigua, I got sick of beans, so during my first night, I found a Japanese restaurant, and went straight at it. However, I didn't take a picture of what I ate. After all, it's Japanese, and not local. The next day, however, I went to a Guatemalan cafeteria, where for 65 GTQ (I think), you get one choice of meat, and two choices of sides, plus a tamale and fresh tortillas. So I got the plate I have above: it looked like pulled pork stew, with a side of vegetables and pasta salad. This one I liked. 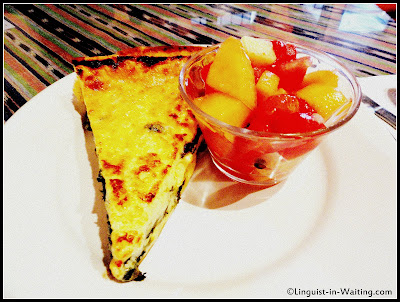 Thaat night, I was taking things slowly, as I had been in Coban a few days ago and got beaten up by some adventure sports. Thus, during the evening, I just took a book, ate a light dinner, and sipped some hot chocolate. I ordered a quiche, which the cafe I went to was apparently rather famous for. 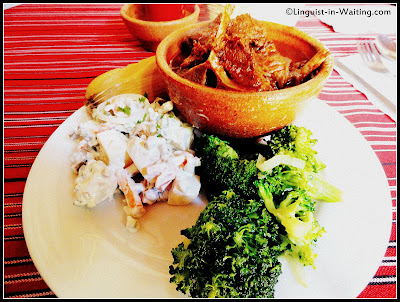 On my second day in Antigua, I decided to go back to the Guatemalan cafeteria, because I just liked the fact that one can simply point and choose. This time, I got goat stew, with a side of steamed broccoli and potato salad. That was an awesome meal. 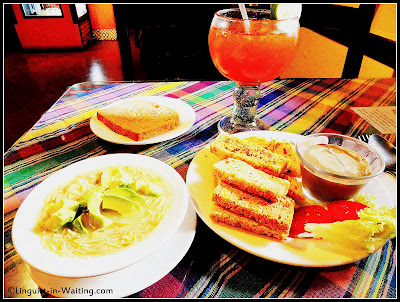 And for dinner, I decided to go to this coffee shop that has a bookshop attached to it. I ordered a bowl of soup, called Xochil, as well as chicken liver pate. The soup was rather spicy, it had noodles in it, and avocado slices. 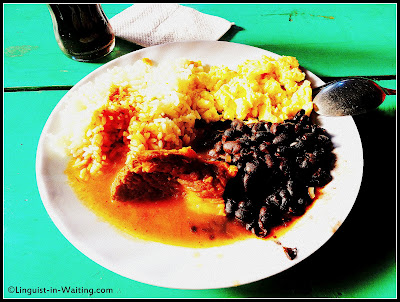 Antigua was a foodie's paradise: there's just plenty of choices available to the common man. However, after Antigua, my next stop was Chichicastenango, which is a rural town. It is famous for its Thursday and Sunday market, which is why I timed my visit on a Sunday. I was there early morning, and the people were still setting up. Meanwhile, the food section of the market was already in full blast, and shoppers were having breakfast. I did as well. For 25 GTQ, I got this plate of scrambled eggs, rice, a piece of stewed meat, and some more beans. Yes, beans reappeared, and this time, you can still see the individual beans. 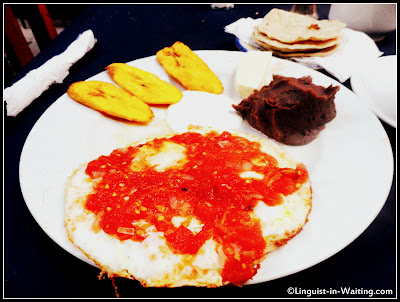 Nebaj was my next stop, and this was the town where I honestly felt like the only foreigner in town. In a hostel restaurant, I got some breakfast, where I ordered some eggs. As expected, there was also beans and tortillas. The beans had a consistency of mashed potatos again. In other days, I didn't feel like looking for sit-down places to eat, so I just went to the market and bought some street food, such as some wicked fried chicken. If you're a hygiene freak, then you probably won't want to eat it, but I figured that I had complete hepatitis vaccines, so whatever. That being said, I had traveler's diarrhea for a week after returning to Buffalo. 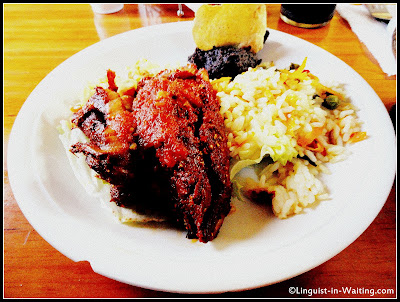 My last stop before returning to Guatemala City was Huehuetenango. In this town, I visited cafeterias where there were no menus. The "menu" was actually the staff; they would come to your table and tell you what they were cooking that day. I always picked the option that I didn't know, just for the sake for finding out what it is. In this one, I got a piece of meat that looked like pork, and a side of fried rice. There's still beans, with a big tortilla chip sticking on top of it.

So that is my food post. My travel entries will continue after this interlude. Overall, the lesson I learned is that Guatemalans and Hondurans love their beans. They can eat it in so many different ways it is insane. And yes, tortillas accompany every meal. Now, I associate the clapping sounds of women with making tortillas, as I have heard them on every restaurant. In one corner, several women would be mashing dough and forming them into small patties, clapping them against their hands, before it goes to the oven.