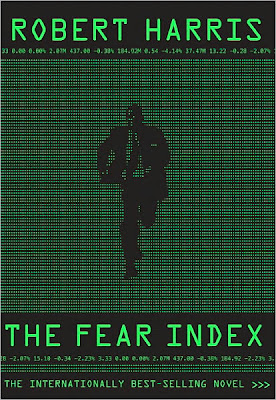 An edited version of this article was first published as Book Review: The Fear Index by Robert Harris on Blogcritics.org.

Can a computer be more intelligent than its creator?

The Fear Index is the story of Alexander Hoffmann, a physicist whose main line of research is artificial intelligence. In the span of twenty-four hours, strange things have happened to Hoffmann. The story begins when an unknown intruder attacks him in his house. Later on, when he goes to work, further strange things happen, which makes Hoffmann think that he has gone crazy. One by one, he sees emails and transactions that were supposedly sent by him, but which he had no recollection of making. In the meantime, two people are dead, and the world's stock market seems to be on the brink of collapse.

This incredibly unbelievable premise is what makes this novel a page-turner. Unbelievable the idea might be, it actually happened in real life. In May 6, 2010, the Flash Crash happened. The Dow Jones plunged 1000 points, but recovered within minutes. This novel explores the idea of a non-human cause to this event. The Fear Index basically explores the idea of a scenario where humans are pitted against the computers that they have created. And based on the progression of events, this novel seems to suggest that computers can win.

After reading this novel, I find myself in the weird predicament of liking and hating this novel. Here is why.

I definitely enjoyed the pace of the novel. I usually do not read thrillers often, but this one was a breeze. I couldn't put it down. I wouldn't be surprised if this novel was published as a mass market paperback and did well as an airport novel. Every chapter had a hook, something that would make the reader think twice whether he would want to put the book down, or find out what happens next given the current chapter. In that sense, I commend the author for knowing what makes a reader push through. I definitely was not bored with this book.

However, there are also parts of The Fear Index that I despise. First of all, Alexander Hoffmann is a tough main character to sympathize with. Seriously, his earnings are in the billions, he lives in a 60 million dollar house in a swanky part of Switzerland, so when his house gets an intruder, part of me feels that I couldn't care less. Not to add the fact that he has very poor social skills, he is a genius with a PhD but with a very crooked sense of priorities. He's the type of person who would rather save his computers than his wife if he gets caught in a burning building. I find myself hard to identify with the main character. In fact, I hated this character, and only went ahead and read the rest of the book because as I mentioned earlier, the author was quite good in crafting the plot that the reader just has to know what happens next, regardless of how alienating the main character can be.

On a larger level, this novel made me reflect on the idea that humans can be surpassed by the abilities of their own creations. This premise is not new: Philip Kerr's Gridiron explored this same question in the context of a "smart" building. This question seems quite gripping: are we really headed to a future where computers control our lives? I really hope that we don't get to that point. Because seriously, computers don't have the same aspects of life that makes us human: humans have a limited cognitive capacity due to memory limitations, for example. But give a computer a big enough RAM and it'll do the most intricate computations.

Thus, the bigger and more important question The Fear Index asks, is how important are computers in our lives? In Hoffmann's world, he banned paper and ink. His company is purely digital: workers are penalized if they bring into the building hard copies of books and newspapers. Is that attitude a healthy one to take? Part of me thinks not. Thus, I see this novel as implicitly a social commentary: this takes to extreme the human propensity to be dependent on computers and paints a worst-case scenario. As much as it might seem to be a simple thriller, The Fear Index also has a philosophical side to it.

Overall, I think I enjoyed this novel. It makes me think. However, I am afraid that most people will simply see this to be a cheap thriller and read it as such. When they're done reading, they'll just think "Oh, that was a cool novel." and move on. I give this novel 3 out of 5 stars. 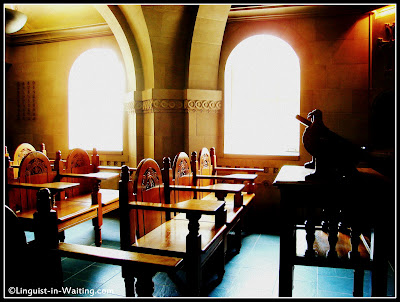 (The Armenian Room, from my Cathedral of Learning Series)