Book Review: The Rules of Attraction by Bret Easton Ellis 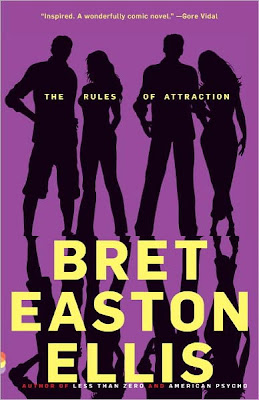 An edited version of this article was first published as Book Review: The Rules of Attraction by Bret Easton Ellis on Blogcritics.org.

Paul has a crush on Sean, Sean wants to sleep with Lauren, Lauren was Paul's ex-girlfriend. In an affluent college town where students attend more parties than classes, and sexualities are more fluid than before, The Rules of Attraction paints a bizarrely dark and satirical take on the upper-middle-class college student culture.

Set in the fictional college town of Camden, New Hampshire, The Rules of Attraction is narrated in first-person by the characters. It mostly focuses on three: Sean, Paul, and Lauren. However, several other characters provide their own account of things every now and then. The novel begins and ends in mid-sentence, giving the impression that the reader is suddenly thrown into the world of these students with no introduction whatsoever. In fact, one thing I noticed about this novel is that the plot isn't introduced slowly; instead, it immediately begins, leaving no time for the reader to catch up and get used to.

I won't even attempt to provide a synopsis here: in short, The Rules of Attraction is in fact, a story about the rules of attraction that exist between spoiled students in a university town. So, what do you need to do in order to get some access to some drugs? What outfit do you need to wear in order to get some sex tonight after the party? This novel provides the answers.

As this novel is a dark comedy and a satire, it makes the reader think by presenting a societal problem in a very skewed and exaggerated fashion. The way I take it, this is Bret Easton Ellis' way of portraying the corruption of the youth. Having dealt with undergrads myself, I can see how the world painted in this novel can mirror real-life college students. While in graduate school, I have come across and taught undergrads who just seem to have very different priorities than what one would usually expect. Instead of classes, undergrads are more interested in parties, drugs, fraternities, and sex. My undergraduate experience was relatively shielded from the elements, and so it is interesting for me to read about social norms and practices of a segment of society in which I am not a part of.

I may not have a lot of comments about the plot, but I have plenty of comments about the structure. The Rules of Attraction is written in the first-person narrative, but the narrator shifts around. This is noted by having the name of the narrator mentioned before every chapter. This style gives the reader access to the narrator's theory of mind: I constantly found myself going back and forth checking whether the narrative of the same event was true across characters. This is illustrated by the relationship between Paul and Sean. Paul's narratives mention heavily their sexual trysts, while Sean doesn't mention anything at all about it. Hence, it is ambiguous whether those sexual episodes actually happened between the two of them, or whether those were just a product of Paul's imagination. These ambiguous twists and turns actually give the novel more meat, or more room to expand, into the reader's head. It allows the characters to be more developed, and is free to the interpretation of the reader.

The shifting first-person also is a good method to narrate events in multiple angles. I suppose, since this is a satire about student life, allowing the reader to have access to the perspective of several students one at a time is the narrative that works the best. This style actually reminds me of Orhan Pamuk's My Name is Red, which was a whodunit novel, but the narrators shifted every chapter, providing the reader with clues as to who killed the victim. In The Rules of Attraction, different students have different priorities. One wants sex, one wants drugs, one wants something else. Everyone has their own priorities, and mind you, it is not to attend class. The shifting first-person narrative does its job rather well in developing this story.

Finally, I should say something about the relevance of The Rules of Attraction to morality. Reading this may give ultra-conservatives a moral heart attack. While reading this, it reminded me of the times when I was still a member of organized religion. As a moral compass, we were instructed to ask ourselves, "Would you be comfortable inviting Jesus to watch this movie, or read this book?" Given my past and what I know about Christianity, Jesus would not like this novel. However, I don't think that is reason enough not to read this. I'd rather read about this and learn more about a sector of society I don't belong to, than live in my own bubble and pretend that individuals like Sean, Paul and Lauren do not exist. The world is a big place, there are many different types of people in it. The Rules of Attraction simply satirizes one slice of society, and I think Bret Easton Ellis has done a good job of it. 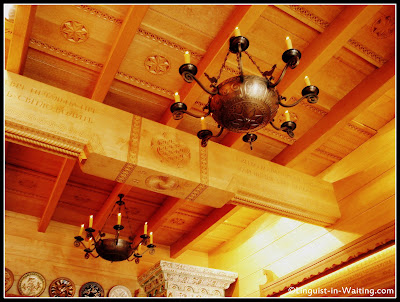 (Lamps of the Ukrainian Classroom, from my Cathedral of Learning Series)