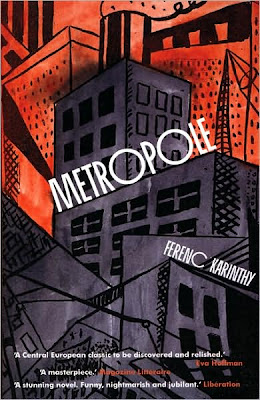 Budai, a Hungarian linguist, is on his way to a conference in Helsinki. However, he somehow boards the wrong connecting flight and finds himself in a strange city where he can't understand a word anyone says. What will Budai do?

Metropole is a study of the absurd. The premise, I have to admit, is interesting. As a linguist myself, I find the book well-researched, thinking to myself that I probably would also do the things that Budai did, given his capacity as a linguist. He supposedly speaks several languages, and has working knowledge of a bunch of other languages. Given his arsenal of languages, he probably would not have a hard time if he finds himself in any country in this planet. However, it seems that he found himself somewhere else, in some parallel plane, in a country that no modern maps seem to have record of. If the reader is willing to suspend disbelief of this premise, then the book will probably work.

Budai slowly falls down into social decay. He loses his money gradually, he gets kicked out of the hotel he was staying, and still he cannot find out where he is. Nobody seems to understand any foreign language, and the language seems to be undecipherable. In a matter of weeks, he gets reduced to a bum, foraging for food in a city that is foreign to him at every level.

So, did I like Metropole? Well, I find myself seesawing between yes and no. I have to admit that the premise is interesting. However, as interesting as it may have been, it also became old quite quickly. I couldn't believe it sustained 230 pages of text. After reading about twenty pages, I already wanted to know how it ended, and got bored at the detailed descriptions of Budai's activities in the city. The only thing that I found amusing was the linguistic aspect of things. One example of this is how the author represented the elevator girl's name: Epepe. She happens to be someone who Budai had a brief connection, and Budai thinks that her name is Epepe, or at least that's how he heard it to be. However, this language seems to be variable, that she pronounces her name differently the next time. Hence, every time her character would appear, it would appear in a different name, from Epepe, to Bebe, to Ebebe, and so on. I always found that amusing.

Perhaps the reason why I do not like Metropole is that I do not see the point. Some dystopian novels have a lesson to be learned. This one, not so much. The novel didn't have a resolution. Yes, there was an ending, but I was totally dissatisfied with it, that it felt like it was a waste of time to read all 230 pages of it. I am not giving away what the ending is, but given how much the build up was, I was expecting something larger. Instead, it was so faint. It was as if a fly landed on my shoulder, and I didn't even notice.

So yes, somehow I am not a big fan of Hungarian literature. Metropole just adds another data point to my collection suggesting that the Hungarian way of story-telling isn't my cup of tea. I give this novel 3 out of 5 stars. 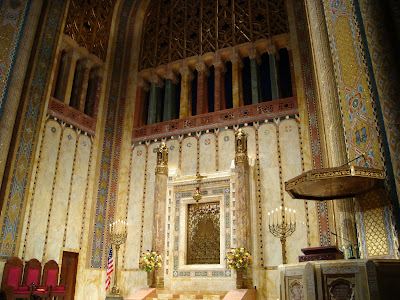 (Facing the Front, from my Temple Emanu-El Series)