This past week, my own material possessions started traveling. Yes boys and girls, this move to Berlin is slowly happening.

In order to find out the most cost-effective way of transporting my goods, I requested a bunch of quotes from several companies. What turned out to be the most efficient one given my needs is a service where I would be the one packing them, then I would be dropping them off to a terminal, and they would ship them. They would then deliver it to my door, to any address I specify in Germany. This cost me about the same price as another person's airline ticket.

So I packed my stuff, and designated a date of drop-off. I was told that it takes 6-7 weeks to arrive, so I dropped it off 4 weeks before I myself departed. That means I only have about 2-3 weeks of waiting time in Berlin before my boxes show up. That's not bad.

When the drop-off date arrived, we drove to a cargo terminal near the airport, and dropped my boxes. It was less than 200 pounds. I arranged it on top of a pallet, and then they weighed it, afterwards, they wrapped it with plastic so that all pieces traveled as one large piece. It will first be flown to another city in the US East Coast. Then, it will travel by ship to England. It will clear customs and enter the European Community in the United Kingdom, and from there, it will be trucked to Germany.

So there, I guess I did my very first shipment. Until now, I was only a bystander when it comes to shipping. I've only watched my parents arrange all the shipping documentation and what not, but I was never a part of the discussion. My fingers are crossed hoping that this shipment would have no problems, and that my stuff would reach Germany safe and sound. As I did not ship anything when I moved from Manila to Buffalo in 2005, bringing only 2 suitcases worth of clothes, I have no previous shipping experience of my own.

So there, my material possessions are now on their way. 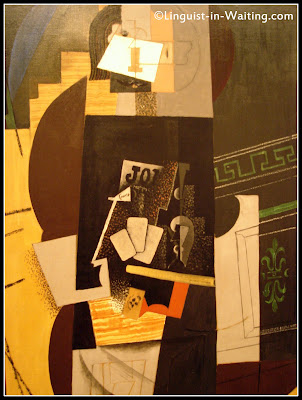 (Cubist Something, from my Museum of Modern Art Series)