So, this is technically not a rant about roommates, but more about neighbors. If you're interested, then read on.

So I currently live in a duplex. For every building, there are two units. Each building is separated by a shared driveway. We had new neighbors that moved in both at the unit that shares our building, as well as the unit across the driveway.

First, they don't know anything about noise control. It seems that they have friends from all over the block, and these friends just knock at their door constantly. We hear these knocks, they don't even use the door bell, they just knock. Most of the times, they even accompany the knock with a shout, calling the person's name.

What I don't understand is how common these knocks are. Like I said in the title, it looks more like tribal behavior. They have plenty of tribe compatriots, and they just visit each other every time.

Oh, have I not told you how annoying it is when their visitors arrive, and use their car horn to broadcast to the whole block that they arrived?

And the other day, they had a party. It lasted until 2 AM. They have no concern with whether the people next door are already sleeping or not. Instead, they just shout out loud. Sometimes, I am contemplating finding out the phone number for the non-emergency police hotline.

We'll see. I am only here in Buffalo for a few weeks anyway. We'll see if my patience can outlast that. 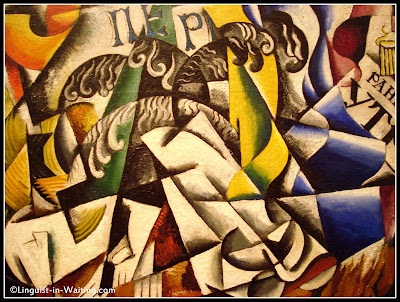 (I Don't Know What This Is, from my Museum of Modern Art Series)