The Year 2012 is about to end. So even though the galaxies aligned, and plenty of people thought we're going to die, I am still here. This is my last post for the year. Let me review what has happened for the past year, as I have done so in 2010 and 2011.

January was a month of travel; winter in Buffalo for 2012 was rather warm, so snow didn't happen that much. We took a daytrip to Cornell University and drove through Pittsford. I continued writing my dissertation in my lab, my office, coffeeshops, and even Toronto. I also headed to New York City to get my German visa, and watch a play with my sister. I also remarked about weird advertising practices. I also went up to Toronto again to visit friends and do some sight-seeing.

February was still travel-heavy; 2012 was the year when I had a conference presentation per month from January to March. I saw some interesting people at the airport on my way to Portland. Portland was the location of the first conference of the year; of course I found some time to do some sight-seeing again. Flying so many times was fun, except for jet lag, but discovering Portland's food cart scene was great. I also took a little vacation on my own, flying to Guatemala and Honduras, and wrote about the backpacker paradox while I was on the road. And while on the road, I had some good news, as I heard that a couple of abstracts of mine were accepted for a conference presentation in New York City and Bloomington. Unfortunately, we ended up having to withdraw from Bloomington, as the circumstances of me and my co-author didn't allow us to attend.

In March, I blogged about my love for theatre, having had the opportunity to see a play not only in Buffalo but also in Tübingen. I was amazed at German efficiency, as well as at David Beckham's crotch. And while we're on the topic of sex, I also watched the movie Shame, and blogged about how weird the US rating system is. I also thought that sometimes television is full of stupidity. And I also had an instance where I was in the supermarket and saw a lady returning beer bottles that violated my stereotypical notions.

April was the month when the semester was about to close, and I experienced affirmation with respect to my work. We also had a movie marathon. I also wondered about my travel philosophy. And I also got a chance to see a play in New York City with my sister. I also got scared at the possible US Presidential candidates at the upcoming Election. I have started thinking about life after graduation. And I blogged about how some people can be idiotic and rude.

May was the month when I finished another bottle of cologne. I also watched several classical recitals, such as the Crossfire Percussion Duo, and the Buffalo Philharmonic Orchestra. Academically, the big picture in my dissertation finally clicked. I also had a little argument online with some trolls about my non-belief in religion. And finally, I realized that I have broad tastes in music, but that I require music to be falsifiable.

With the month of June, I started thinking about wrapping up my stay in Buffalo. I have been writing my dissertation, and I think it made me fat. I now have a finished manuscript. I complained about my roommates once more, as well as the lull that one experiences when one submits the manuscript to the committee. On a separate note, two of my friends got married, so we flew to Los Angeles to attend, but we also did some sight-seeing. Of course, once the manuscript comes back, there are revisions. And a stranger flirted with me. And I had to move once more because I didn't want to renew the lease to my old apartment.

July was the 8th anniversary of my blog. I also wrote my 7th Itchy Feet article. It was a rare month, because I found myself in Buffalo and was able to attend the June in Buffalo festival for the first time, as most previous Junes would find me overseas. I had to find a new chat client, as Meebo shut down. And it seemed like someone gave me a job offer. Shortly, I found out that I did get a job, and I was moving to Berlin. My battle with religious conservatives continue, and I prepared to get anotehr visa, this time, a working visa for Germany. I even bought my 15th Lonely Planet volume to prepare for the move. I also did research on how to ship my stuff.

August was the moving preparation month. While in New York City getting my German visa, I saw people so individualized with their iPods. I started getting ready for my move, although the hot summer was quite bad and annoying. I also was puzzled at the parental involvement when it comes to college in the USA. I also complained about some hardline shippers and their attitudes toward rejection. I also saw some incoming freshmen, and wondered at the generation gap between me, a 30-year-old, and these 19-year-olds. Of course, I also defended my dissertation. My material possessions started their travel, leaving Buffalo ahead of me.

September was the month where I was wrapping up my stay in Buffalo. I did a garage sale, I witnessed weird parents, I had a weird conversation with my adviser, and I submitted my dissertation. I started writing a little series on How to Grad School, and also found out that I am an academic descendant of Leibniz. I left Buffalo, looked for apartments in Berlin, and dealt with German bureaucracy. Little did I know, Berlin would be the location where I'd see friends I haven't seen for twelve years. And I finally came to appreciate ISSS.

During October, I had a little passport accident. I also noticed little things that are different here in Berlin. I also made a rule for myself that there would be a divide between weekdays and weekends. I also pondered about freedom of speech and immaturity. Later on, I realized that I tend to keep track of many things in my life. I was scammed by a Gypsy. And I had to slowly bring my German up to speed. I also had to get used to the money system here. And I never fail to be amazed at the tourists visiting Checkpoint Charlie. Finally, I ranted about big corporations and chain establishments.

November was the month when I went shopping after earning my paychek from my first real job. I also had to do some academic adjustment, while discovering Berlin and its cafe-bar culture. I also was amazed at their notion of security. The weather got colder, as I found some travel bloggers elitist and arrogant. I also ranted about false logics and the German smoking culture. I blogged about the cheese I ate, as well as about not being able to tune out German in public.

December found me busy with work, while riding the trains and seeing different cityscapes both inside and outside Germany. I attended a piano recital, as well as socialized with fellow Filipinos. I discovered a gourmet cheese shop, and found Berliners rather bizarre when it comes to their winter habits. I also attended a coffee tasting session. Finally, I ranted about conservatives.

So that was my 2012. There were many changes; I graduated, I moved to Berlin, and contrary to the false Mayan-inspired beliefs, I am still here. This has been the most exciting year for me so far. I traveled to awesome places like Guatemala, and I was able to try living in Europe. I added 5 new countries to my country count (Guatemala, Honduras, Germany, Poland, and France), bringing it to 25. And now I am working in an institute with a job that I like. There are other developments, but those I prefer to keep for my own. Here's to hoping that 2013 will also be a blast, with many more awesome things to come.

See you all next year! 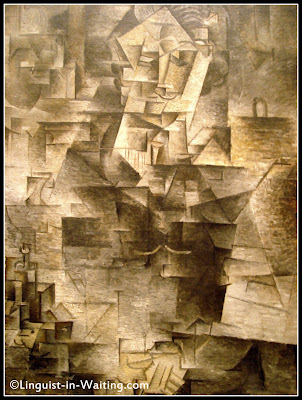 (Cubist?, from my Art Institute of Chicago Series)