A couple of weeks ago, I had the chance to watch the Japanese movie Love Exposure, directed by Sion Sono. This is a movie that is controversial, deals with many issues about love, and is four hours long. If you are interested, you might want to check the plot synopsis in Wikipedia.

Anyway, it took me two nights to finish this movie, as it was rather long. However, it is in my opinion rather well-made, and it deals with several different manifestations of love.

The thing is, love isn't always vanilla. Love can also be pain. I greatly appreciated the fact that people are messed up in the movie due to different types of love. Yu's father became abusive due to his love for God and religion; the female characters became psychos because of their relative's inappropriate love for them. Basically, every bad episode in this movie is due to the fact that one character's love results in adverse reactions to others.

I also like the parallel that is drawn between religion and perversion. As the director pointed out, religion is just another type of perversion. In essence, religion is lowered to the level of upskirt photography, something that is so common in Japan. People do things to get self-gratification. Some take photos of women's panties, others join a church.

The thing is, this movie somehow redefines love. Love is in essence the feeling that humans have, that is not the result of some rational logical flow. The 13th Chapter of the Corinthians is liberally quoted in the movie, with several characters mentioning that love conquers all, love bears all things, that love never fails. And to some degree, that is true. No matter how irrational something might be, if we have a strong emotion directed towards it, it will happen. Sometimes, it can be admired as devotion, other times, it can be disgustingly messed up. 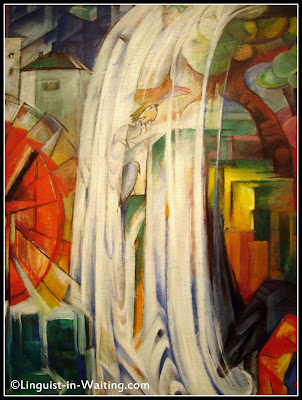 (Waterfall, from my Art Institute of Chicago Series)