Back in November, I posted an article about ten cheeses that I have sampled so far. I haven't been repeating my cheese purchases, and I have tried ten more. For my first ten, I had 5 cheeses from France, 3 from Germany, and one each from Denmark and the Netherlands. This time, France continues to dominate, with 7 cheeses. The rest comes from Spain, the Netherlands, and Italy.

Cheese No. 12 was Peyrigoux. It is a cheese that comes in the form of a ring, also from France, and with 60% fat content. It wasn't too memorable, in my opinion. Although I also do not have any bad reactions to it.

Cheese No. 13 was Roquefort Papillon, recommended to me by Zhu. I loved this cheese. It was quite strong, but semi-soft, and I loved how it tasted on bread. I especially dig the salty aspect of it. Needless to say, this was also from France.

Cheese No. 14 was also from France, but from the Basque area, Bleu des Basques. This is still blue cheese, with 50% fat content. I liked it, but I think I have other blue cheeses that I prefer.

Cheese No. 15 is my first cheese from Spain, Valdeon. This was particularly memorable to me. I loved its very strong flavor, as it is cave aged for months in Spain. It had a very complex flavor, which I loved every bit. The outer layer is wrapped in sycamore leaves, adding interesting bacteria to add flavor to it. This is something that I would like to consume with a nice glass of wine. As much as I have been partial to French cheese, my sole Spanish entry for this list is particularly high-ranking.

Cheese No. 16 was the humble Gouda. I should say this might be my least favorite cheese of the list. It is a hard cheese, which isn't bad per se, but I just wanted more flavor in my cheese, and this doesn't offer much. That being said, this is a very popular cheese in the Netherlands.

Cheese No. 17 was Epoisses de Bourgogne. We are back in France, with 50% fat content. This was rather smelly, but it smells stronger than it tastes. Taste-wise, it was particularly mild. But it was rather soft, and was sold in individual plastic packages, instead of simply wrapped in plastic film.

Cheese No. 18 was Gres des Vosges, from the Alsace region in France. I don't have any particularly strong comments about this one. It has 50% fat content, but I had more profound memories for the other cheeses in the list.

Cheese No. 19 hails from Italy, the Roccolo Divino. I liked this one for its violet and blackberry hints. It is semi-hard, with 62% fat content. Taste-wise, it is one of the more unique tastes I have encountered in cheese.

The last cheese in the list, cheese No. 20, is once again, French, the Fougerus. It has a fern on the outside. It is not as strong as the other cheeses, but it is a very nice mild pasty cheese. I think it is a soft cheese that is great, because it is not as famous as the other cheeses of its kind (i.e., brie).

So these are my newest cheeses I have tried so far. I still haven't repeated a purchase, as there are plenty of other cheeses to try out. Needless to say, I am already looking forward to my next list. 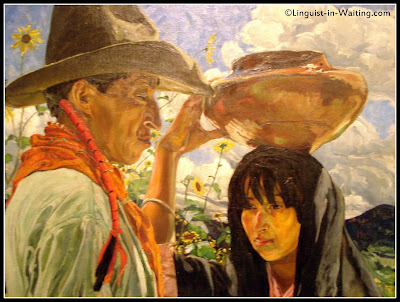 (Man and Woman, from my Art Institute of Chicago Series)