Denglisch and my Delicious Back

Every now and then, I see signs on the streets, and sometimes, it would make me chuckle, simply because I know both English and German, and so there's linguistic intereference that sometimes creates weird meanings.

Take for example, the phrase delicious back. What does that exactly mean? I see it in bakeries and bakeshops every now and then, and for a reason. See, the German word for "bake" is backen, which is a verb, and from there, the root back can be used to refer to anything baked. Hence, bakery is bäckerei, and baked goods is backwaren.

So that's fine, until someone decides that mixing German and English words would sound cool. Sometimes, I guess, they are, but every now and then, they come out comic and strange. Like delicious back. What would a bakery know about my backside? As far as I can tell, no bakery has sampled my back.

So I read more about this, and apparently, there's this thing called Denglish/Denglisch, which is the portmanteau of Deutsch and English. I suppose this is not a rare phenomena, there's Chinglish (Chinese and English) and Engrish (English and Japanese) as well; about the latter, I have had plenty of experience while living in Japan. So now, I have been seeing the same things here in Berlin, although given that both languages are in the same language family, it is less obvious than when I was in Osaka. As most of the time, you see these Denglisch words and phrases as English words receiving German inflection, such as downgeloadet.

Ah, the world is indeed getting smaller and smaller. 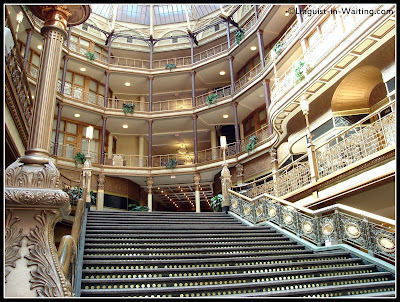