One morning, I woke up, booted my computer, and checked my email. I saw that there was an email from a name who I recognized. Oh, I remember, this guy, we went to school together when we were 4th grade until 6th grade. This was still back in the Philippines, when I was attending elementary school at the school that was just one block away from our house. Wow, that was a long time ago. I was 4th grade in 1991 and 6th grade in 1993.

After graduating from elementary school in 1993, I moved to a different school for 7th grade onwards. I then lost contact with this guy. Later on, I found him again, over social networks like Friendster (this was way popular compared to Facebook, at least back in the early 2000s in the Philippines). Then every now and then, when I would find myself in Manila, I would bump into him, like, being in the same bus heading back home, and such. Aside from that, there was no concrete contact anymore.

So how would one react when, after 20 years (yeah, it's been 20 years since I graduated from elementary school) I get a one-liner of an email, written in an ungrammatical sentence form, to the point that I don't even know what he wanted. Did he want to say hello?

I honestly didn't know how to react, that I simply clicked on the delete button.

Anyway, friendship is not static. It is dynamic, it can change. If both parties don't make an effort to keep the friendship warm, then it will be cold and fade away. I always see human relationships this way, whether it is romantically-inclined or not. It is like train tracks. Sometimes, tracks merge and go together, but at times, they diverge as well. So people might bump into another person and merge, and hang out together, sometimes just for a short time, perhaps, like when you meet someone while you're on a trip, and you never meet this person again, but sometimes it is for a time longer than that. But nothing is forever. Friendships do break down, and relationships as well. People break up, people get divorced. Nothing is permanent.

And it is quite cognitively dissonant when one thinks that a connection is already broken and forgotten, but then there is an attempt to reconnect. I mean, are the things we shared in common still there? It feels like you're a stranger again.

So yes, I just disregarded the email and didn't respond. I don't know, I didn't see the point of re-establishing contact, when I am 6148 miles away in the first place. 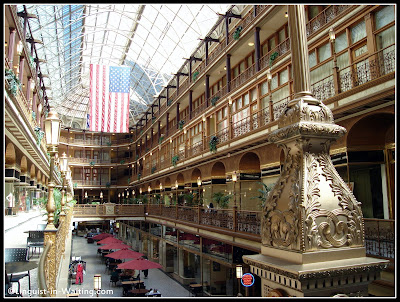 (The Arcade, from my Cleveland Old Arcade Series)