Thursday and Friday were the last two days of the Annual Meeting of the German Linguistic Society. I met my adviser before the sessions, and attended several talks in two different workshops. I was mainly interested in the narration and the salience workshops, so I was shuttling back and forth between those two rooms.

Anyway, I met a few interesting people during these last two days. During one of the coffee breaks, I had a little chat with the speaker of the talk that I reacted to in the previous day, and we basically got to the understanding that formal semanticists and psycholinguists look for different things and have different goals, which sometimes results in these circumstances where they aim for the same goal but attain it differently.

I also had a chat with other researchers, and had interesting ideas for possible future collaborations. Ideas like that are always interesting, and perhaps it will bloom into nice research programs, something that any young researcher in academia definitely would find useful.

During Friday, I heard two plenary talks, one by Larry Horn about focus and exhaustivity, and another by Ina Bornkessel-Schlesewsky on neurobiologically-informed linguistic theories. Both are high-level theoretical talks, which are sort of relevant to everyone, but not much data-oriented. It's more a forest view than a tree view.

Anyway, I think this conference was a success. There were parts of it that felt different, I guess, because I was used to the American system, and the German system is a little different. For example, the size. The German Linguistic Society feels more like the CUNY crowd. That is expected, after all, the USA is a bigger country. And in DGfS, everyone seems to know everyone, like everyone is part of one big family. I don't think the LSA is like that. The LSA is more professional (read: cold and formal), while DGfS members seem to use the venue to catch up on everyone. I think I like that.

So there, that was DGfS 2013. Maybe by next year, by the time the conference call comes out, I might have relevant research I can present, so I might attend the next one too. That would be cool. 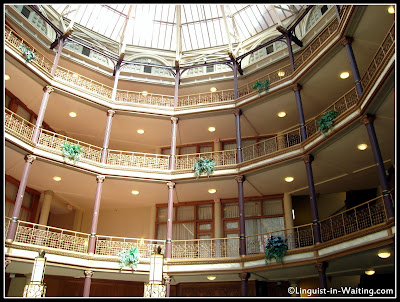