Snow and the Little German Comb

A month ago, winter came back to Berlin. There were successive days of warmth, and the sun finally came out again. However, there was a cold front, that after enjoying a few days of 15-degree weather, we were all reminded of winter and negative temperatures. And with it, snow also fell, and guessing from the amount of snow on top of the cars, it probably was around 4-6 inches worth. This was during the weekend of March 8-11.

The streets were snowy. The sidewalks were slippery. The cars were buried. And come Monday morning, when everyone had to go back to work, I saw these Berliners trying to clean their cars of snow. They were using these dainty little brushes, those ones that look like they are for grooming your dog. Yeah, they were trying to use those to clear off huge slabs of ice.

I dunno, I always get an internal chuckle every time I see those people using those small and dainty equipment to clear snow. I guess Buffalo definitely toughened me up when it comes to winter weather. Here, I never saw snow shovels being sold in supermarkets. And I never saw people shoveling snow either. Instead, they were just sweeping them, using brooms. Yeah, I suppose snow doesn't fall hard enough here to warrant a shovel. But only when there is snowfall that is heavier than usual, then I get to see these comic (in my opinion) cases of Germans managing their snow. I guess that is not surprising, after all, they use umbrellas to protect their heads from snowfall as well, so why would I expect anything less? 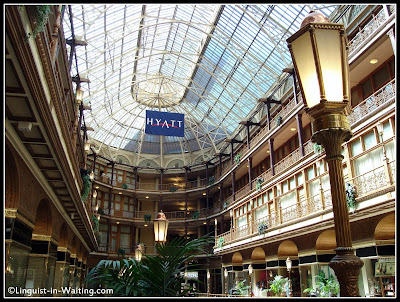 (Hyatt in the Arcade, from my Cleveland Old Arcade Series)