Some good news: I am heading to Germany!

Well, I already am in Germany. But I am echoing the first time I did this sort of announcement: it was December 2011 and I found out that an abstract I submitted for a conference was reviewed and accepted. Well, sure enough, it happened again.

And so it turns out that the conference is to be held in a town I have already been to twice before: Tübingen. I was there for the first time in February 2012 for the conference, and again briefly this past winter for New Year's Eve. And I guess I am coming back this June.

Fortunately, I am already in Germany and so travel to this town won't be complicated like before. Unfortunately, travel to this town won't increase my country count. But it does increase my conference presentation count for this year. There have already been two presentations earlier this year (one in Boston in January, and another in Phoenix in February) listing me as a co-author, so this is the third one. Plus, there are two other invited talks that are firm (one in June and another in September). Finally, there are two other abstracts that are under review, so if those get accepted, then there are other presentations to prepare for.

So yes, this year has been productive already, at least on the professional side, and it's not even the middle of the year. 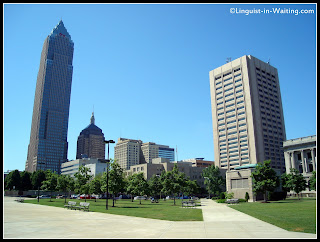 (Skyscrapers in Downtown, from my Downtown Cleveland Series)