Book Review: Everything is Illuminated by Jonathan Safran Foer 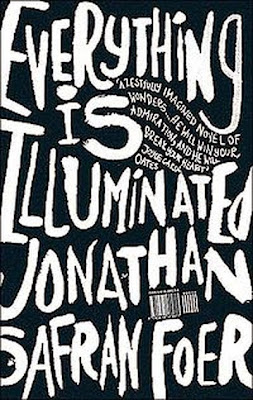 I am not sure I have a positive impression of this book. I picked it up, read it, and got lost in the pages, so to speak. Hence, my experience reading this book was in fact the opposite of its title; for me, nothing was illuminated. And I have to say that I cannot speak positively of this book.

Let's begin first with the plot. There are two story-lines: one in the present time, which consists of Jonathan, an American, who travels to Ukraine; Alex, a Ukrainian translator; and Alex's grandfather, a driver who supposedly is blind. Alex and his grandfather operate a shady tour guide outfit, catering for the needs of Jews living abroad who would want to visit the Old World in order to find their relatives. Oh, there's also a mad female dog, dubbed Sammy Davis Junior Junior, who is also known as the Officious Seeing Eye Bitch of the tour company. The other story line takes place several generations earlier, which depicts the lives of Jonathan's ancestors from the 1700s to the time around World War II.

These two story-lines are written differently: the modern story-line actually consists of letters written by Alex to Jonathan, as well as Alex's narrative about what happened during Jonathan's visit, and since Alex is not a native English speaker, there are plenty of comic moments here. The narrative featuring the older generation was written in a better and higher-level English. So in essence, this book switches back and forth between comedy and tragedy. The surprising thing, however, is that the comedy pretty much stops in the middle of the book. Sometime after the middle, the comic mistakes of Alex's English usage disappear, and it turns into an epistolary exchange of disagreements between Jonathan and Alex who couldn't agree on what to write about, since Jonathan seems to take more poetic license and fictionalize things, while Alex wants to stay faithful to the story as much as he can.

Anyway, it is a complicated plot, and there is a twist. I won't mention the twist here, but let's just say that someone in their midst had a dark secret. And somebody dies in the end.

The thing I didn't like about this novel was that it felt like it was very bipolar to me. There was a comic part, and a tragic part. It felt like it was written by multiple people wanting to tell a different story, and that the end result turned out to be something very incoherent. I had a hard time figuring out what the story was, and for the most part, I felt lost. The multiple entities that had the same names, as well as singular entities having multiple names, these aspects didn't help either. Don't get me wrong, I have read several other novels with complicated story-lines, but this one is just overkill. In less than 300 pages, Safran Foer crammed a comedy and a tragedy and two stories in multiple timelines.

See, this book reminded me of James Joyce's Ulysses, which, if I remember correctly, each episode of Joyce's gigantic book had a different writing style. This book was similar. There was a writing style for Alex, a writing style for the older timeline, a writing style for Alex's letters, and so forth. There was even a section that looked like an encyclopedia. In my opinion, this was more clutter than literature. If an author would employ something like this, he better have more things to say than something that will only fit within 300 pages. The way I see it, if the author were a chef, it felt like he wanted to serve a multi-course meal within a single dish.

Overall, I wasn't too impressed. I'm not sure I'd recommend this one. I have seen the movie several years ago, and the storyline there was a little bit more simplified. Most of the time, whenever I watch a movie whose book I have also read, I tend to think that the book was better than the movie. In this case, it was the other way around. I give this book 2 out of 5 stars.