Book Review: The Autumn of the Patriarch by Gabriel García Márquez 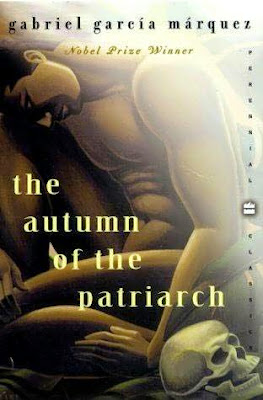 This is the third time I have picked up a book by García Márquez. The first time was back in 2005, when I began graduate school, and I read 100 Years of Solitude, which I remembered to be a great book. The second time was last year, when I read Love in the Time of Cholera, and I remember liking it as well. So I opted to pick a third book, which is The Autumn of the Patriarch. And whoa, this was intense.

See, this was García Márquez's dictator novel, and as with his other magical realistic books, this one was written in the same vein, featuring a dictator leader of a Caribbean country, who just wouldn't die. He died the first time, and yet he lives again. His powers border on the supernatural. And yes, he is ruthless. He is corrupt, killing political opponents and serving them for dinner, drowning children en masse in the sea just because they were used in one of his corrupt schemes, even blackmailing the Holy See just so that his mother be declared a saint by the Roman Catholic Church. This was definitely one scary read.

See, as I was reading this, I cringed, as if every word entering my field of vision was painfully and excruciatingly hard to process. I was shocked that García Márquez actually used several dictators from real life as a model for this novel. And I was just shocked at how inhumane some people can be. Perhaps, the writing style was also a factor to this. García Márquez writes in extended long sentences, mostly run on sentences, something that reminds me of the style of Jose Saramago, except that at least in the previous books I have read, García Márquez didn't use this style. So that leads me to conclude that he had a specific purpose in mind when he wrote it this way. And that purpose was to slow down the reader, and make the reader feel the pain of the society that was tragically and unluckily selected to endure the whiles and whims of the maniacal dictator of this country. After all, when the sentences extend to several lines long, then your working memory is taxed, and it just is a heavy read and a huge burden to the brain. And that amplifies the effect of the narrative.

I almost want to say that this novel is not meant to be read, but rather, to be felt. And perhaps everyone should read this, as a warning against the corrupting effects that absolute power can bestow upon the people who have them.

I suppose I am glad that this was not the first García Márquez novel that I have read. If this were the first book of his for me, I probably would have dismissed him as a writer that is not for me. Only because I have read two other books of his in the past (hence I sort of have an idea what his style is), as well as the fact that I think I have a better idea of my political inclinations now than several years ago, then I was able to appreciate this novel more. If you are a beginner to García Márquez's novels, please don't pick this up first. Read the other novels who are more accessible to read, and only after reading them should one touch this. Nevertheless, I think this novel should be on everyone's reading list.

I absolutely give this book 5 out of 5 stars.