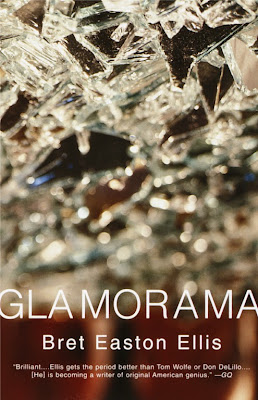 Wow, this is brilliant. When I picked this up, I knew I was in for a ride. And yes, it definitely delivered.

See, I read this book, having already been familiar with Ellis' work, as I have already read in the past American Psycho, The Rules of Attraction, Lunar Park, and Less Than Zero. All of his works somehow are linked together, with characters recurring across novels, and for the most part, most if not all of them are these disaffected characters that are really very hard to sympathize with. Either they are bored yuppies moonlighting as serial killers, college students doing drugs, or something in between. In Glamorama, it's these bunch of models and actors and other celebrities who are full of themselves, and somehow, some of them are not only models, but also terrorists.

There are several trademarks in the novel that make it definitely an Ellis novel. First of all, there is the unreliable narrator. The main character here is Victor Ward, who used to be Victor Johnson back in The Rules of Attraction. Now, several years have passed, and he has changed his surname, and is now a very famous model and "it" boy. Several characters from The Rules of Attraction return, and I suggest reading that book first before reading this, if you haven't done so already. The common denominator in these characters is that all of them are celebrities, shallow, and stupid.

Perhaps that is the point that Ellis satirizes here. He satirizes the current consumerism and celebrity-driven life. The novel is set in New York, London, Paris, and Milan, yet I wouldn't have a hard time imagining this novel in Los Angeles either. Everyone is concerned about who is sleeping with who, about which fashion designer manufactured which dress, and so on. As such, I happen to be someone who couldn't care less about these issues, and therefore I find it hard to sympathize with these people. It's a totally different experience from when I was reading American Psycho, where I found myself liking Patrick Bateman so much, to the point that I was actually cheering him whenever he did one of his murders. In this current book, I was instead wishing Victor Ward some schadenfreude, since I couldn't care less of his attitude anyway, so sometimes I thought it was actually good for him that he found himself in a bad predicament.

Speaking of which, yes, he is a very unreliable narrator. He thinks that he's in a movie all the time, he thinks he's always being filmed, to the point that when the terrorist attacks happen around him, he thinks those are just mannequins that look very real, instead of thinking that those are actual humans who are victims of an attack. He is just so shallow he thinks his whole life is a movie. And when he meets people who are more important and famous, he gets some major insecurity. In this case, I find it hard to sympathize with him, and therefore I am reluctant to say that he is an anti-hero. He's probably more some unfortunate stupid bystander.

Because of this, I hated the first 100 pages of this novel. I thought that was unnecessary and too long. I mean, we already know that celebrities are shallow and stupid, right? I guess I didn't need 100 pages for that point to be reinforced. But then, weird things started happening, and I started to get hooked to the point that I found myself by the edge of my seat.

Anyway, I think I am recommending this book more for the experience, more for the experience of reading an Ellis novel, rather than the story. The story is gripping, the satire stings, yet the characters are horrible. They aren't your role models. Sometimes, you would probably feel they deserve the trouble they're going through. But that aside, this is a brilliant book, something that would make your head reel so many times even though it's been days since you've read the last chapter of the book and put it away. I give this 5 out of 5 stars, although as I said before, it could have been shorter.