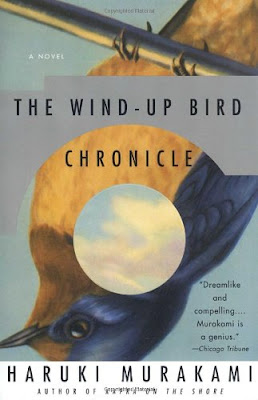 Wow, this book is such a mindfuck. What did I get myself into?

The Wind-Up Bird Chronicle is the fourth novel written by Haruki Murakami which I have read. I began reading him after picking up Kafka on the Shore; I went back to my review of that book back in 2012, where I said that the book made my head spin. Somehow I think I have a similar experience with this book, but since this current book isn't my first time reading Murakami, I already know his style and therefore I have an idea on how my head will spin this time. Then I read Norwegian Wood, which I didn't like, mostly because the magical realism was lacking, and rather, it was just a sappy love story. And then less than a year ago, I read 1Q84, and boy that was a blast. So now, I picked up this book, and yes, it still made my head spin, and yes, it was again a blast.

This book is divided into three parts, and tells the story of Toru Okada, a very passive and apathetic young man who is unemployed, and is married to Kumiko. One day, their cat disappears, and so his wife asks him to find it. This task leads from one adventure to another, and sure enough, the stories become weirder and weirder. Toru meets several weird characters, such as May Kasahara, who is this teenage girl who doesn't go to school, but rather sunbathes in the neighborhood; Toru also meets two sisters who are just plain weird, Malta and Creta Kano. Malta Kano seems to be a divinity expert whose fashion sense is stuck in the 1960s (the book is set in the 1980s), while Creta Kano is a mental prostitute (she has sex with other men but not physically, only virtually). Toru also meets Lieutenant Mamiya, who was an officer in the Imperial Japanese army and had bizarre experiences while imprisoned in Manchuria during World War II. And finally, Toru meets Nutmeg and Cinnamon, two bizarre characters, mother and child, who know a lot about security and high-profile clients.

Anyway, I am not going to attempt to explain a summary here, as the plot is immensely complicated. However, it involves parallel worlds, it involves teleportation by means of an underground dried well, and it involves killing the antagonist, Noboru Wataya, who is somehow connected to Toru in various parallel worlds. Toru is a character that is hard to like, after all, he is so passive and apathetic, I couldn't imagine myself being friends with such a person. However, what happens around him is so fantastic that I kept cheering him on to move ahead and discover a new bizarre event. And yes, again, I am amazed at Murakami for being able to wrap things around at the end; most if not all of the loose ends are tied, and somehow, at an abstract level, this novel makes sense. But no, I am not claiming that I fully understand this novel, but there is a sense of completion which I felt when I read the final page.

So yes, I recommend this book. I see parallelisms with the motifs here as well as in 1Q84, heck, a character even reappears there. If you find parallel worlds and magical realism a topic you like, then by all means read this book. I give this book 5 out of 5 stars.