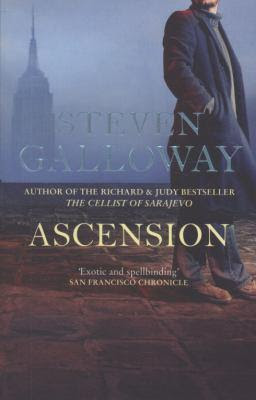 Suspenseful. This book is indeed, very wonderfully written, and is filled with suspense. Even though, I have to say, the topic isn't one that is typically the topic of suspenseful narratives. There aren't superheros, car chases, killings and bombings, nothing like that. It is just a book about the life of a Roma wire-walker, and yet the author manages to fill the pages with narrative that not only makes the reader turn the page, but also be filled with literary suspense.

See, this is the story of Salvo Ursari, a Roma. He was born somewhere in Transylvania, in the 1910s. His parents are killed in front of him due to a fire caused by the non-Roma villagers, and so he had to escape and move away. Somehow, he finds himself learning how to walk on the wire, and joins a circus. He is eventually discovered by an American circus executive, and so he moves to the United States together with his family. He builds a family of his own, and eventually settles down in Canada. And he makes one last death-defying walk, across the Twin Towers in Manhattan.

That's how the book is, if narrated in chronological order. However, the book actually begins at the end, with a chapter about his walk across the Twin Towers. And yes, as this first chapter ends, the reader finds Salvo Ursari falling, falling fast to his death. So the only way the story has to go is backwards.

I also loved Galloway's writing style. I have read his most famous work, The Cellist of Sarajevo, and I remember being impressed by that book as well. This one just has a narrative that captivates the reader very well, and yes, full of suspense. Galloway has a neat gift where he can transform the lives of ordinary people into extra-ordinary ones worth the reader's attention. See, Salvo Ursari and his family aren't superheros, they are just normal folks who perform in a circus for a living, and yet multiple times I have found myself yearning to know what would happen next, rooting for this very interesting family through their good and bad times, in tragic and in comic events.

I definitely would be recommending this book. I learned a lot, and yes, the prose is amazing. It is one of those books that I wished never ended. I give this book 5 out of 5 stars.