Book Review: The Boy Who Followed Ripley by Patricia Highsmith 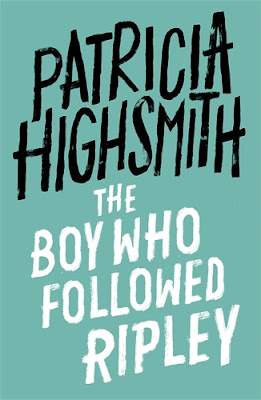 I just finished the fourth book in Patricia Highsmith's Ripliad series. I read The Talented Mr. Ripley in 2013, then Ripley Under Ground in 2014, and finally Ripley's Game last year. So this time, I picked up The Boy Who Followed Ripley, which takes our anti-hero to a different sphere, I should say.

See, the plot is exactly how the title says it, there was a boy who followed Ripley. Tom Ripley is now a little bit older, as the story is set in the late 1970s. He is comfortably enjoying his life in France, in his villa in Villeperce, when a rich American boy shows up in the village, with a disturbed conscience. Ripley takes a liking to this boy, and together, they end up in Berlin.

Again, I don't want to give details of the synopsis here, there's Wikipedia for that. What I want to do here, however, is explore Tom Ripley's personality, because I think this book provides something about our main character, something with the previous three books didn't provide.

See, in the first book, Tom Ripley is portrayed as a cold-blooded individual, who killed Dickie Greenleaf and his other associates simply because of personal motives. What was great about the first book is that even though Tom Ripley was definitely a criminal, somehow the book portrayed him in a way where the reader can still sympathize with him. After all, he was an anti-hero. As I read further, book after book, slowly Tom Ripley is showing some emotion, and more importantly, empathy.

Take for example when Frank Pierson showed up in his village. Frank has a secret: he killed his father (at least that's what he says, the book doesn't really say if he really did that or not, so the verdict is still out on that one). Tom Ripley takes Frank under his wing and tries to influence him so that Frank's conscience can be eliminated, and that Frank can go on with his life. So the interesting thing is that, even though Tom seems to act like someone who has no conscience (after all, he's trying to teach someone to disregard one's conscience), Tom at the same time seems to act like there is something more than rational cold-blooded self-preservation that is driving him. Why did he take an interest in the boy exactly? And why did he go all the way to Berlin, battling Italian kidnappers even, just to rescue Frank when the boy was kidnapped?

So in this book, for once, Tom does irrational things. Or maybe they are perfectly rational, and I just am not seeing it. In any case, this is still a page turner, though it is qualitatively different from the first three books. In the first three books, Tom Ripley was definitely an anti-hero: he usurps the wealth of Dickie Greenleaf in the first book, he then tries to put up a painting forgery business in the second book, and in the third book, he uses a terminally-ill man for his own interests and personal gain. This time, it is less like that, and Tom Ripley is starting to be a hero. Yes, he killed a man, an Italian-type kidnapper, but this death is more like the death of a villain caused by a hero, easier to be cheered upon by the reader.

In any case, I still enjoyed this book. It provided a more in-depth exploration of the personality of Tom Ripley. It's less of a crime thriller, but regardless it is a page-turner. There are some gender-bending homoerotic undertones in there, but then again, we expected that in Tom Ripley. He has his strengths and weaknesses, and given what I know so far, sex is one aspect he is not good at. In the previous books, he was portrayed as someone who swings back and forth between men and women just to pursue his own gains. Four books later, what seems to be the case is that he is more asexual than sexual, he has sex with his wife very rarely, and really has no affinity towards hetero- nor homosexual desires, that he can simply dress in drag if he wanted, no big deal, just so that he can play a trick on those Italian kidnappers.

Overall, again I enjoyed this book. I give this 5 out of 5 stars, for a great character exploration on Tom Ripley. He is definitely one of the more interesting characters out there.