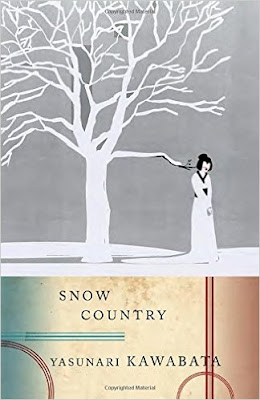 I haven't read a lot of Japanese novels. And of the ones that I have, these novels are not really your stereotypical Japanese literature. I have read a lot of novels by Murakami Haruki, but he is a modern writer and isn't the first name that would pop up if you're studying Japanese classical literature. I also have read a few novels by Ishiguro Kazuo, but he is more British than Japanese, and I believe he himself doesn't want to be categorized as a Japanese writer. So I picked up Kawabata Yasunari's Snow Country.

I've known about this novel for a while, even when I was in Japan. But I just haven't had the chance to pick it up. I know it because Kawabata happens to be the first Japanese to receive the Nobel Prize for Literature. I have always in my head his photo, with his weird white hair standing up from his head, and somehow it always struck me as something weird and zany.

Anyway, I picked up this novel, which is translated by Edward Seidensticker into English. It's a relatively short novel, and is composed of multiple short vignettes that somehow begin and end abruptly, and at the same time, blend into each other as a coherent whole. It tells the story of a Tokyo dilettante, Shimamura, who claims to know a lot about ballet, and who has a wife and children in Tokyo. The novel is set in a hot spring town in the snow country. The idea is that men go to these hot spring towns for a short period of time, and geishas take care of their needs. These geishas are more or less prostitutes, as they are less talented than the geishas that are found in Kyoto for example. Shimamura has a short-term relationship with Komako, but at the same time he is attracted to Yoko.

There are plenty of elements in the novel that I find very Japanese-like. As a reader, I found myself reading a lot between the lines. There are many things that are left unsaid, and merely suggested. As much as I have spent almost 5 years in Japan, I still cannot say that I have penetrated the Japanese psyche, and there are plenty of aspects of Japanese culture that I find incomprehensible. Some parts of it I feel like mind reading: Japanese place heavy importance on little things, in a way that many small objects become symbols for something larger. Take the haiku for example. It is a form of poetry, that consists on just a few syllables, yet the imagery and scenery that these three little lines convey can be grandiose.

The same can be said of this book. At 175 pages, it's not thick. But the narrative has plenty of things to unpack, and if one doesn't have experience with the Japanese culture, then there's a large probability that these little things can just go over one's head. It is like a bonsai: the novel is small, yet represents a cultural microcosm. If you don't know how to appreciate it, then you might disregard some small detail that is actually crucial.

I enjoyed this book, but I must say it isn't my most favorite genre. The experience I get every time I read a piece of classical Japanese literature is that my head is foggy and there are aspects of it that I nevertheless fail to understand. Same here. It feels like it has the potential to be profound, but somehow I am not getting it. 3 out of 5 stars.