This was a disappointment. Perhaps I created a hype of it in my head, but in the end, the expectation and the reality didn't quite match.

See, I somehow always wanted to visit the Basilica Cistern. It was on my list of places to check out in case I visit Istanbul. So since I was in Istanbul for a weekend, I put this on the list. I saw pictures of the Basilica Cistern many times in the past, either in the Internet or even in the guidebook that we were using. So I imagined this very visually interesting place that has an eerie feel and dimly illuminated, which would have been an interesting place to explore.

Second, the lighting was also quite different from what I was expecting. It was too dim, and the pillars inside looked more hidden than what I expected them to be. Almost all of my photos turned out bad. I only have one photo I feel comfortable sharing, which is the one below. 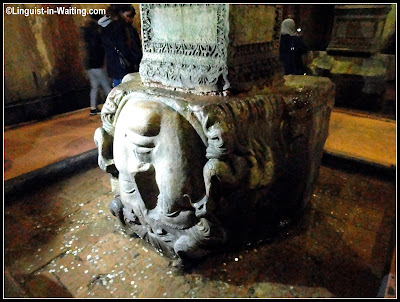 The bizarre thing is that perhaps that picture turned out like that because I accidentally caught the flash of someone else's camera. I had another shot which didn't have flash and that turned out horrible.

Oh, I forgot to mention that I had to budge through elbows and queue up just in order to take that photo. It was very crowded, and as someone who doesn't really like taking pictures of random strangers, it was very difficult to take photos because there was always someone there who wanted the shot.

Then again perhaps I was just unlucky this time. I guess the Basilica Cistern was being renovated, and therefore it wasn't displaying its usual beauty. I've visited some places that were under renovation before (the Shwedagon Paya is a not-so-recent example), but visiting them wasn't as disappointing as this one. Perhaps next time I should decrease the hype I create in my head.