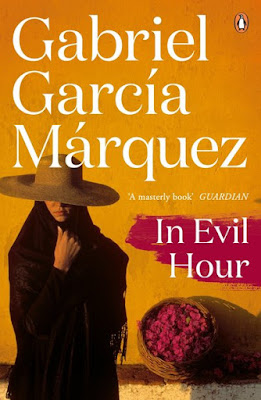 This book was a very humid and sultry one, where one definitely felt that evil was in the air. The story takes place in an unnamed Colombian village, where everyone knows everyone. Somehow, during the night, there is someone who is posting anonymous criticisms of everyone in the village, which causes people to act weirdly. In fact, one of the opening scenes of the book involves a man, otherwise sane and respectable, shooting his wife's alleged lover dead.

I love García Márquez's writing style here. The mental picture is complete, and the reader is definitely transported to the scene. It's always raining, it's always hot and humid, it's always eerie and spooky, fit for a hot and humid Amazonian village with no name, and with hopeless people as its inhabitants. There isn't an element of magical realism in the narrative, but if you're familiar with the later books of García Márquez, then you already see hints of the great things to come later.

This is a rather short novel, clocking in at about 180 pages. Nevertheless, the author successfully weaves an intricate picture of evil as it floats in the air, permeating the atmosphere, where all the characters are sweaty and hot, as you imagine them opening their legs nonchalantly, while the fan their necks with a downtrodden piece of cardboard paper.

I think I definitely liked the fact that there wasn't a character that I found likeable. Everyone was evil in their own way. Either it's the mayor who was rather corrupt, or the other inhabitants who didn't really have a stellar track record when it comes to morality. In any case, it definitely paints a picture of a town where it feels like it's a godforsaken cul de sac of the universe.

I would absolutely recommend this to fans of García Márquez. If you want to see where it all began, then perhaps this book is worth picking up. It is after all his debut novel. I would give this 4 out of 5 stars.