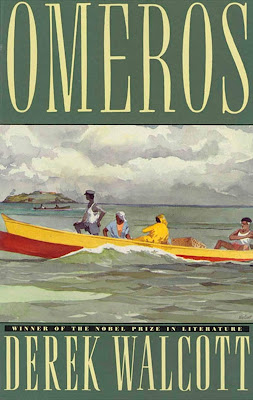 Sorry, but I didn't get this.

I picked up this book because I wanted to enrich the geographical sources of the books I read. So this book was my selection when I wanted to read something written by an author from Saint Lucia. Derek Walcott's name came up, and since he won the Nobel Prize for Literature, I figured this would be a good place to start.

Except however much I try, somehow I cannot wrap my head around what he was presenting readers in Omeros. It is an epic poem, yes. Yet I felt like I was stuck in a dream phase, with scenes and vignettes passing in front of me, but for some reason they were very blurry. It's as if I forgot to wear my glasses, and everything was hazy. I feel like there were plenty of scenes that just passed by rapidly, and I couldn't really figure out what was happening. I have read other epics before, I have read other works of poetry before, yet I felt like this was perhaps the most difficult work I have encountered so far.

I cannot even grasp who the characters are. There is a character called Seven Seas: at some point I thought it was the name of a boat, yet according to the Wikipedia article he's apparently a blind man. There are several other characters that have parallels to Homer's Iliad (which I have read in the past). In any case, it definitely felt like 320 pages just flew by, and I was left in the side road wondering what actually happened.

And this makes me scratch my head: why does this text amaze people enough that they decided to give the author a Nobel Prize? What are they seeing that I didn't? Later on, I find several resources on how to understand Omeros online, and so I wonder, if this book is too cryptic that you need study guides to comprehend it, then perhaps the blocker isn't me, but the book. In any case, this is not the most accessible book for me.

There is a chance that I might be looking at the poetry of Omeros with the expectations I have for prose, which is what I am more used to. I cannot discount that possibility. But in any case, I can say that this wasn't the most pleasant reading experience for me, and as much as there might be something to get if one decides to reread and dissect the text, I must say that I have plenty of other books I want to get into, and I don't want to repeat the disappointment I already have gotten when reading Omeros for the first time, just for the hope of potentially understanding this a second time around.