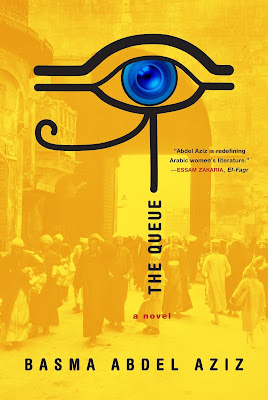 Oh this was a fantastic book. This book paints a very dystopian picture of an authoritarian and totalitarian regime, and the way society copes with it. In this unnamed Middle Eastern country, there is an all-knowing authority, The Gate. People need various kinds of documents from The Gate, and it seems that they need these documents because without them they cannot lead their lives. So of course a queue forms, with various people waiting for The Gate to open. Yet it seems that The Gate never opens, and the queue just gets longer and longer, to the point that even a system of public transportation emerges to ferry people back and forth from the various places in the queue.

Then there are the people: there is a wounded man, with a bullet trapped in his body. He needs surgery to get the bullet out, yet in this dystopian world, you need a mountain of paperwork to get this surgery, not to mention the fact that at some point, the government has decided to ban outright the surgery if its purpose is to take bullets out of one's body. There is a newspaper called The Truth, which is more or less the official channel of the government. Out of this newspaper comes out the official fatwas and the other pronouncements that the government issues, where history is constantly being re-written. There is a telecommunications company, Violet Telecom, which is government-owned, and all phone calls are recorded. Everyone more or less is under surveillance.

This is a short and concise novel, just clocking in at less than 220 pages. The premise is sustained all the way until the end - I suppose there's plenty of bad things that could happen given this premise. And yes, I already say at the outset that this book does not have a positive ending. Rather, this book would serve as a warning, and given the way politics are going nowadays, and the right-wing nationalism soaring high in some areas, perhaps it is a very timely warning.

Another book from the MENA region with a totalitarian theme comes to mind: 2084: The End of the World by Boualem Sansal. I only bring this other book up, because I think The Queue did what 2084 failed to do, that is, stick to the premises. 2084 had the same premise, yet the story became more and more complicated, to the point that the twists and turns of the plot became a little bit over the top, and diluted the overall serious tone that the premise otherwise had. The Queue on the other hand just stuck with the original premise, and developed it finely, all the way to the end, for a sombre finish. I would say I prefer this development better.

Overall, I liked this book, and definitely would recommend it to other readers. I give it 5 out of 5 stars.