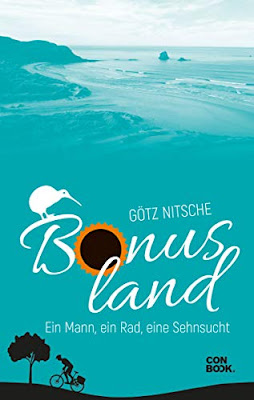 Urgh. What can I say? I did not like this book. It was so melodramatic. It was so elitist. And if not for the fact that I picked this book up because I wanted to read a travelogue that was set in New Zealand, then I would have only negative thoughts about this book. In any case, as I was progressing deep into the book, the only thing that I can think of is that the author must be quite a snowflake.

See, I have read a few travelogues by now. And it seems that there are travelogues that I like and travelogues that I hate. Those that I like tend to be written by people who were trained journalists, who happened to decide to write about their travels. Most of the time, the resulting travelogue is definitely focused on the land, the destination, and it therefore becomes a very good enabler of vicarious travelling for the reader. On the other hand, those travelogues I end up hating are those that are written by the regular person, who decided to go somewhere "unique", and then opted to write about it. Most of the time, these works end up being a work where the author simply waxes poetic about how they went to see "the real Kazakhstan" and not the Disney-fication of their destination of choice, but in the end discovering their real self. And unfortunately, this book belongs to the latter category.

To these authors I end up thinking, "Cry me a river." I am sorry, but if you think that you had a very special trip because you decided to be reckless and shortchange yourself with your bicycle's safety features, or because you endured long cold nights since you didn't know how to properly prepare for a trip, or because you thought you were very smart and proud since you managed to spend a night in a stinky cesspit of a hotel in Honduras, then unfortunately I have to disagree with you. That I must say isn't cause to celebrate. Rather, these are the signs that you have been rather naive. You should be thankful that you're still alive.

Throughout this book, there is the thread of elitism. The thought that "my trip is better than yours". That backpackers are better than package tourists, that cyclists are better travellers than those who rent a car, that travelling alone is better than with a partner, etc. I am just sick of this narrative. I used to think that way too: I had a bucket list, I had a list of countries I wanted to check off, and yes, I even thought that travellers who carry backpacks are better than those who carry suitcases. But in the end, does it make a difference? If it makes you happy travelling with a suitcase, then by all means, go for it!

In the Philippines there is a saying that goes "You just have to eat more rice." I feel like this is the appropriate saying here. This book is oozing with naivete. I've travelled with backpacks and suitcases, I took public transportation and rented cars. There is a mode for every occasion. Just because one has been travelling by car doesn't mean that one is automatically missing out on something. This book made things seem very categorical. In the end, it just alienated readers, like me. Sorry, but unfortunately, I don't think I would recommend this.

I give it 2 out of 5 stars. There's better travelogues out there to read in case you're looking for one.