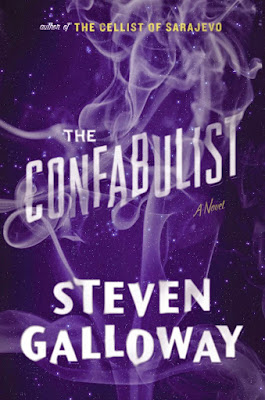 I have had a hard time processing this book. See, I used to like the author's other works. As usual, I first encountered the author by reading The Cellist of Sarajevo, and I liked what I read. Then I read Ascension and I liked that too. However, this current book was different. See, as I was reading the book, I came across the sexual harassment lawsuit issue that affected the author, leading to his dismissal from the University of British Columbia. And somehow during my reading of the book, I also came across the article describing how he was unlawfully dismissed, and so he was awarded a significant sum of money. However, his writing career pretty much is in tatters.

The thing is, I have an issue with sexual harassment in academia. There is a power issue, and I personally know of cases where there are female students who were propositioned by male professors. Steven Galloway had an affair with a student, and of course as an outsider I do not know what exactly happened between his accuser and him, but it is hard to be rational. It is hard to dismiss the idea that there is the possibility that as someone with a position of power, what might not be harassment to him might be to a female student.

Alas, it is not my place to decide what exactly happened. Nevertheless, I find this information clouding my perception of this book, and I wish that I hadn't come across to it while I was reading the book. Because I have to admit it affects how I place value on this book. Unfortunately, we are only mortals.

In any case, I would say that I would rate this book as neutral. See, this is the story of Harry Houdini, a magician in the 1920s. This is also the story of Martin Strauss, an unreliable narrator, someone who has a mental illness, someone who has false memories, and someone who has beliefs that he had something to do with the death of Harry Houdini, even though they are decades apart. There are plenty of falsehoods in the novel, and I suppose the reader's task is to figure out which events have actually happened in the narrative world, and which events were only fictional and existing in Martin's head.

To be honest, I started losing interest in Martin's narrative. I wondered, what exactly was this narrative's role in the story? I was more interested in Houdini's narrative, and when the book switches back to Martin's, I would be thinking, "Oh, this person again?" See, it's already obvious from the beginning that something doesn't add up with Martin. Heck, the first scene is him in a psychiatrist's office. And the dates don't add up either. I suppose that was an easy give-away from the very beginning.

Anyway, I must say I also liked the fact that this book allowed me to delve into parts of history that I don't know. I didn't know that Spiritualism was a big thing, especially after World War I. I suppose plenty of people died during the war, and people were just too gullible to believe anything that would give them hope. I have no idea how true Galloway's descriptions are of the extent of Spiritualism in the US and European governments, but I would be scared if political decisions were dependent on the whims of alleged spirit mediums.

Overall, I find myself see-sawing back and forth between liking this book and hating it. In the end, I suppose it's a neutral feeling, and I am clouded by information that isn't actually contained in the book. That's unfortunate, but it's hard to change emotions I must say. I give this book 3 out of 5 stars.