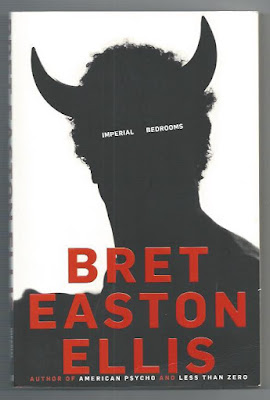 Ok, I do think that I am done with Bret Easton Ellis.

See, upon finishing this novel, I have read all of his novels published, so far. And it has been a wild ride. I used to like what I was reading, to the point that I would even characterise it was mind-blowing. I loved American Psycho. That made me read the rest: The Rules of Attraction, Lunar Park, Less Than Zero, and Glamorama. I read them in that order. I liked them all, giving 4 or 5 stars on a 5-star scale. But for some reason I suppose the novelty wore off, and they all started sounding the same. So when I read The Informers, I suppose I was already too desensitised that I didn't care anymore. And I am afraid that this attitude of mine is still true when reading this current book.

Imperial Bedrooms is actually a sequel to Less Than Zero. The earlier book was set in 1985, and now the same characters are now forty-year-olds in 2010. Yet their behaviour still feels like they're careless teenagers. And yeah, it's hard to care when the cast is hard to sympathise with.

See, in this book, you find rich and glamorous people, driving luxury cars, and have vices and other bad habits. They have their own personal drug dealers, pimps, and psychiatrists. Can I even identify with these people? So when these people start getting into trouble, like being framed for murder, then I feel like they deserve it. I feel like that's actually a good thing, with karma doing its deed. And since there's no character there that I could identify or root for, then that works against being engaged to read further.

Let me comment a little bit on the narrative and literary structure. The scenes in this book are very minimally described. Each felt like a fleeting vignette, just little sketches allowing the reader to figure out what exactly was happening (oh that's a rape scene, got it), but nothing more than that. It's like opening a door, taking a peak for 3 seconds, and closing it and moving to another door. Things were very hard to grasp, especially in the beginning. And sometimes I still didn't see how things connected, and I had a hard time figuring out who exactly was doing what, who was sleeping with who, who had a vested interest in who, and so on, and so forth.

Overall, I found myself not engaged with this book. Bizarrely enough, reading this book means I have fully read all of Ellis' published novels. But I think even if he releases another book, I won't be too eager to pick it up. I give this one 2 out of 5 stars.